The Moscow Metro is renowned for being if not the most beautiful, one of this most beautiful, metros in the world.  The construction of the metro began during an extremely tumultuous period of the Soviet Union; a time when the country as a whole was going through rapid collectivization and industrialization.

The first stage of the Moscow Metro opened in May of 1935.  Although, the project was rolled out in four stages, with the final stage starting after the conclusion of World War II.  During the initial planning phase, the designers consulted with employees of the London Underground.  In fact, much of the engineering design work that was done for the Moscow Metro, was done by British Engineers.  When it first opened, the Moscow Metro was hailed as being better than Western capitalists’ metros due to its speed and beauty.

The metro system is known not only for its beauty, but also for its use as a bomb shelter both during and after World War II.  World War I was the first major war were aerial bombing was utilized.  Later, during the Spanish Civil War, Hitler had given Franco bombers to utilize in his campaign against the Spanish government.  With these events in mind, where cities had been attacked from the air, the Moscow Metro planners had designed the system deep enough to act as bomb shelters.  This proved to be a very smart decision, as the metro system was used for exactly this purpose during WWII.  Following the war, during the beginning of the Cold War, stations were designed and built deep enough to be used as nuclear bomb shelters.

In contemporary times, the Moscow Metro is known for its elegant murals and Soviet era architecture.  Tourists to the city frequently make the metro a destination in and of itself.  The murals and mosaics displayed in the metro commonly depict socialist themes; including those of workers and other national achievements. 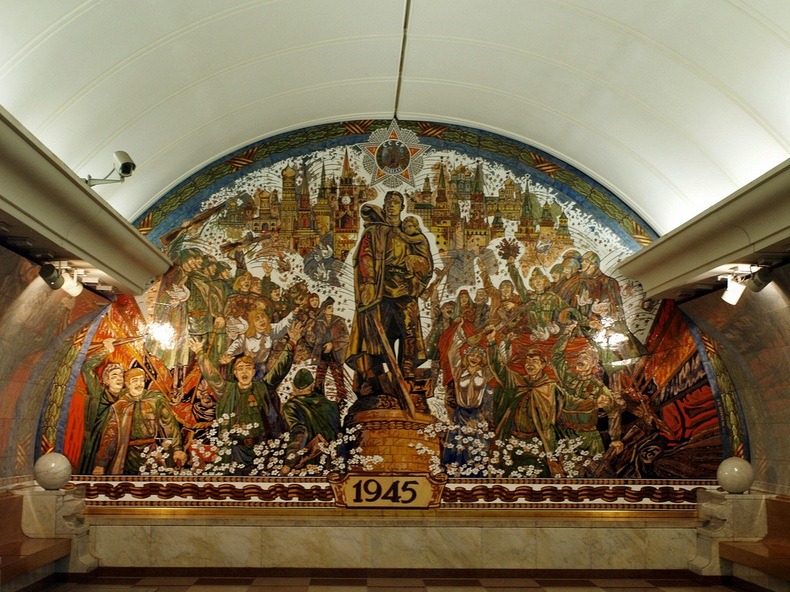 When studied in-depth, one can conclude that the Moscow Metro is used for both artistic and practical purposes.  Relatively few other metros in the world have this unique combination.

15 thoughts on “The Moscow Metro”